This past year has seen me focus obsessively on drawing three main subjects; hares, crows, and nettles, with an enormous bias on the latter.  The reason for these particular subjects is not entirely clear to me, except that I have found drawing them extremely seductive, in contrast to other subjects I've explored in the past.  There is some history; crows have had a sort of allure for me for many years now - not the kind of geeky Gothic fascination associated with films such as the one with Bruce Lee's son in, but something much more fundamental and earthy.  I experience a sort of sad, romantic beauty when I look at crows, especially in a field of grass, or on  a stone wall.  They remind me of my grandfather in his black jacket and trousers. 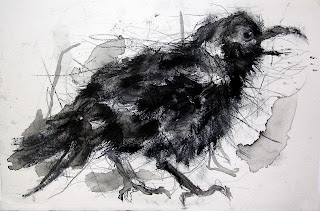 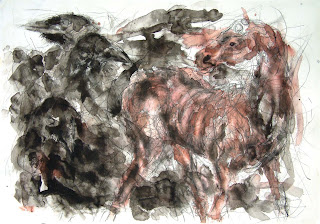 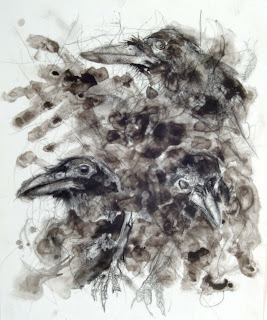 Traditionally, they do evoke also a sort of folky mysticism, the sort normally associated with ravens like in the song "Crazy Man Michael" by Fairport Convention, which I know people bring to the drawings of the hares that I've been doing, but I always try to play this down.  It always seems to me that the presence of the hare was much more prevalent in English folklore than in Irish, where the role of the animal character was occupied by hounds and bulls and, strangely enough, crows. 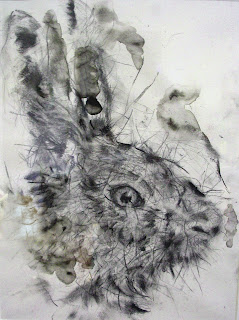 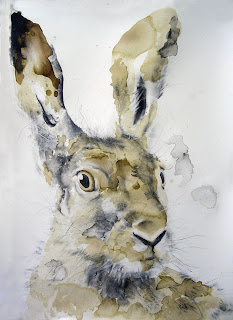 And as for the nettles, it's the humility of the subject matter that really appeals to me.  And I try to reflect this in the way that they are portrayed.  The drawings are small, and invariably modest, lacking in any "wow factor" or sense of visual exclamation that might be reminiscent of the kind of advertising media methods that we're used to seeing today.  They don't try to reach out and grab our attention, as admittedly much of my earlier work had a tendency to do.  They just sit there and sort of "be".  But then again they don't - they're always changing, with every minute that they're exposed to the light.  I make them by pulping actual nettles and using the pulp - just as it is - to draw out the shapes of the same nettles drawn earlier in the day.  They don't look like much at first to be honest.  Just pools of green water with jagged edges.  It's when they dry, that's when the real process happens, almost like a sort of magic.  They take on a real sense of being alive, as though the life energy of the plant has transferred itself through the process.  And this happens when I have stopped drawing, without the presence of my hand.  I love the poverty of this material, making a drawing so humble and perennial, but at once precious because of its beauty and short life span. 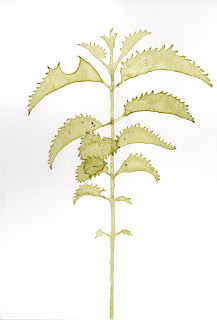 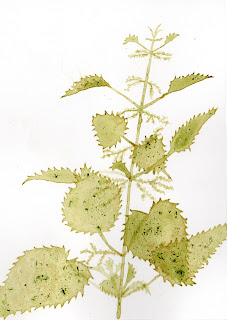 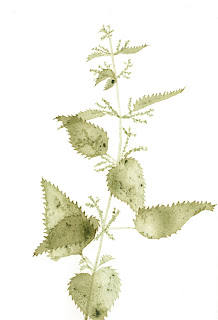 This set of themes and imagery are what make up my current studio practice.  It's an ongoing exploration, and  hopefully in 2011 the body of work will be complete, and I will be aiming to exhibit it in a place where it can stretch out some roots and flourish.
Andy
Posted by Andy at 09:16